This is an absorbing story that challenges as it unravels. With its strong feminist focus, the storylines are played out against the myths about powerful women (aka ‘witches’) in remote Scottish islands. 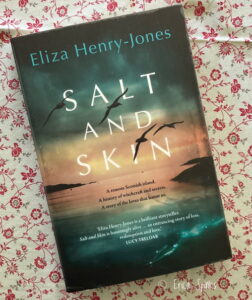 Luda is a photographer who moves with her two teenaged children from drought-stricken Australia to a collection of islands in Scotland’s harsh north after the death of her husband. She has taken a job to document the damage climate change is making to the islands and, while photographing an eroded cliff, captures images of sheets of rock collapsing onto the beach below. The photos she takes there and what she does with them estranges her from many of the local community.

As Luda is alienated, she focuses on the sparse records of local 17th century witch-hunts in an attempt to give names to those executed women. Meanwhile, Luda’s children, Darcy and Min, are fighting their own ghosts as they navigate their way through a tangle of relationships and new ways of living. The ghosts and myths of the past swirl around the present day and create a fog of doubt and fear in the community.

With its themes of climate change and feminism, I found it’s the story of power – who has it and who hasn’t – that shines through in this story. There is so much guilt, grief and magic here as the characters search to overcome violence and betrayal – both experienced and echoed from the past.

Salt and Skin is an outstanding novel that bewitched me. Five stars from me.

Read more about Salt and Skin on Goodreads.